Democracy: Cause of Debt Problems

According to this report, USA Inc., America's debt and future obligations total $47 trillion, or $395,000 per household.

Our debt problems did not happen overnight.  They started long before the 2008-2009 recession.  Governments in most democratic countries around the world have been running deficits and debts for decades to fuel fake economies and fake wealth.  According to the above report, the U.S. has been running deficits for every year since 1965 with the exception of five years.

Most people claim that it is the politicians' fault.  It is not.

Why do politicians persistently run deficits?

The simple answer:  If they don't, voters will fire them and replace them with politicians who will.

It's not that the voters want deficits (most voters do not know the difference between deficit and debt anyways).  Voters simply want money, as explained here.

Politicians know this.  Therefore, they are pressured to spend and to keep taxes low.  Spending too much and taxing too little, causes deficits.  Politicians are humans like voters, which means they are motivated to preserve their income or jobs.  Hence, they run budget deficits, year in and year out, to keep their jobs.  Ultimately, voters control what politicians do and get what they want.

Therefore, politicians are behaving as expected, given the "rules of the game".

So, one can argue that it is the voters' fault for these persistent deficits. 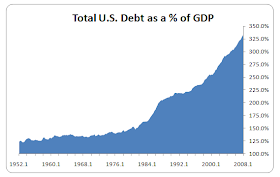 Therefore, voters are behaving as expected, given the "rules of the game".

However, these voter-demands cause deficits.

So, what are the "rules of the game"?  It's democracy.  It's the system.  There are thousands of different types of systems in this world.  Each system shapes and motivates behaviour in different ways.  If you want your sales rep to sell more, you increase his/her commission.  If you do not want people to park on the street, you hand out parking tickets.  The capitalist system motivates people to take risks and start businesses.  The communist system eliminates that motivation.  The democratic system enables voters to maximize their immediate well-being at the expense of the future.  Most people in the democratic system are behaving as expected.

As explained in problem with democracy, we still think democracy is the best system in the world.  This is because it is the most effective in minimizing or replacing corrupt officials in government.

Housing, the most manipulated market in the world